Posted by Good Ol' Gnabry over 7 years ago · 2 replies

I'm only new to this but i've grown increasingly tired of the rumours on who we will sign, for how much and whether Arsene (god bless him) will just cop out again as has since the departure of Alex Song, whom I believe was the last true defensive midfielder at the club. I would've welcome Song back with open arms and judging by his recent performances for West Ham he could've slotted in with no adjustment time that alot of midfielders in particular, need in the league. Alas, this is just a daydream and we don't have him. So the debate rolls on, who is our next midfield destroyer? 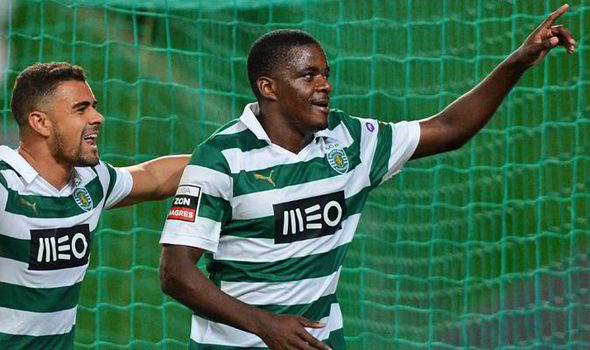 Perfect positioning, reading of the game, strength in the challenge, controlled aggression and composure are all qualities William has in the locker. But perhaps most impressive of all is his ability to learn and quickly too. I watched Sweden vs Portugal in the WC qualifiers and I have serious doubts whether the result would've been a Portuguese victory if he had not come on at 2-0 down to halt the Swedish attack. Ronaldo will take the plaudits for his hat-trick but as Peter Taylor in The Damned United uttered to Brian Clough "Oh, yes, you're the shop window, I grant you that. The razzle and the bloody dazzle. But I'm the goods in the back!" I dare you to watch that game and disagree with me.

He has improved visibly game by game. He was putting in very good performances at the start of last season, excellent ones by Christmas, and has been simply outstanding over recent months

His only true weakness i've deduced from watching a few games is his passing can be loose and he often plays the safest option when a more incisive one could be made, a problem we can relate to sometimes. However, under the mentorship of a coach obsessed with technical qualities, i'm confident he can be a key player in our team.

I read a post on here about Morgan Schniederlin and how he's what we need but others disagreeing that he isn't physically up to the task like Matic, Wanyama, Sissoko etc. Here is your answer fellow gooners. What do you guys think? At a cost of roughly £25 million which is there or there about what Southampton are charging for their products..I mean players these days. These are just the thoughts of an 18 year old but, as much as I love him and his determination, Coquelin is not the man I want anchoring. We can do better, a club of our stature can attract world class players and evidently in the last two windows has. Can Carvalho occupy the vacant throne of the great Gilberto Silva?

First post, so be as critical as possible and argue against it. That's where the fun is to be had.

(I cleaned up the formatting a little bit in your post, hope that's ok!)

I'm a fan of William Carvalho. When we were first rumoured to be interested in him, I downloaded a bunch of full Sporting matches to see what the fuss was about. He's a huge guy (6'3" I think). He floats around the DM zone quite gracefully despite of his size, and has a lot of lateral movement.

The lateral movement in particular is what caught my eye. Most midfielders today naturally drift forward if there is an opening. Even Flamini does it, it's just part of the game. Carvalho, however, stays back crabbing around in front of the back four, even if the team is in full attack mode.

He's a good reader of the game, able to position himself to compensate for size. But his usual role is as a backup option. He rarely attempts to go head on against an opponent, preferring to let other players deal with them and providing them with a backup passing option if they win the duel, or to provide a second body if the duel is going wrong.

That's the type of DM we need, in my opinion. Schneiderlin is good, but he is just another "modern DM" that is more of a box-to-box than a defensive cog.

That's the type of DM we need, in my opinion. Schneiderlin is good, but he is just another "modern DM" that is more of a box-to-box than a defensive cog.

I completely agree. Considering how many attacking midfielders we have, we are currently restricting them of what they really want to do since they are forced into more defensive duties due to the lack of a pure CDM. Carvalho will offer that freedom. Not saying that means Cazorla and Ozil don't need to track back anymore, they do, but it will just offer that much more assurance in the back.